ZURICH, Sept. 16, 2020 /PRNewswire/ -- AirConsole, a globally leading platform for casual games, is enabling users to play Nintendo Switch and PS4 games on the web for the very first time. 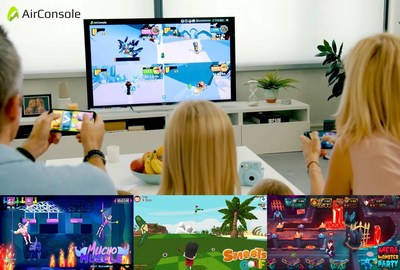 The video games industry is one of the few sectors to have experienced a surge in growth as a result of the Coronavirus pandemic. With millions spending more time at home, AirConsole's team is committed to bringing instantly accessible gaming  to the masses.

The cloud-based video game console is available from every home through just a web browser. Smartphones are used as gamepads and no additional hardware is required for a full video game console experience. AirConsole boasts a library of 160 games across a variety of genres.

Offering a true social gaming experience, AirConsole is disrupting casual console video gaming. Less than 5 years old, the Swiss firm is bringing casual gaming to a new environment, letting people play together on their computers and TVs without dedicated gaming hardware. AirConsole is now offering more convenience than ever before by expanding to Android TV, allowing players to access console games directly on their TV devices.

Indeed, AirConsole's exceptional accessibility has seen its usage surge during the Coronavirus pandemic, with a growth of 500% over the last few months. Their average playtime of 65 minutes with 3 people in front of the same screen demonstrates the true user-friendliness of the platform. AirConsole offers a free version and a premium subscription for $4.99 per month or $23.99 per year.

The following console games are now available on AirConsole:

AirConsole also boasts its own original games and continues to invest heavily in new content.

"With this new batch of games, AirConsole is not only increasing the number of premium games but also creating original content that suits new audiences such as families with kids. We are now a valid alternative to traditional video game consoles" says Rafael Morgan, Head of product and marketing at AirConsole and calls it "a new era of AirConsole"

Original titles which include:

AirConsole is a Start-Up based in Zurich, Switzerland. Founded by Ex-Google Tech-Lead and ETH Zurich Alumnus Andrin von Rechenberg, the company quickly rose to fame by overcoming the previously unsolved challenge of latency when playing games using smartphones as controllers. More than 4,500 developers globally have co-created games that have been published on AirConsole, which in return have been consumed by more than 7 million players from 190+ countries. To date, AirConsole's team has raised 7.4 million USD.